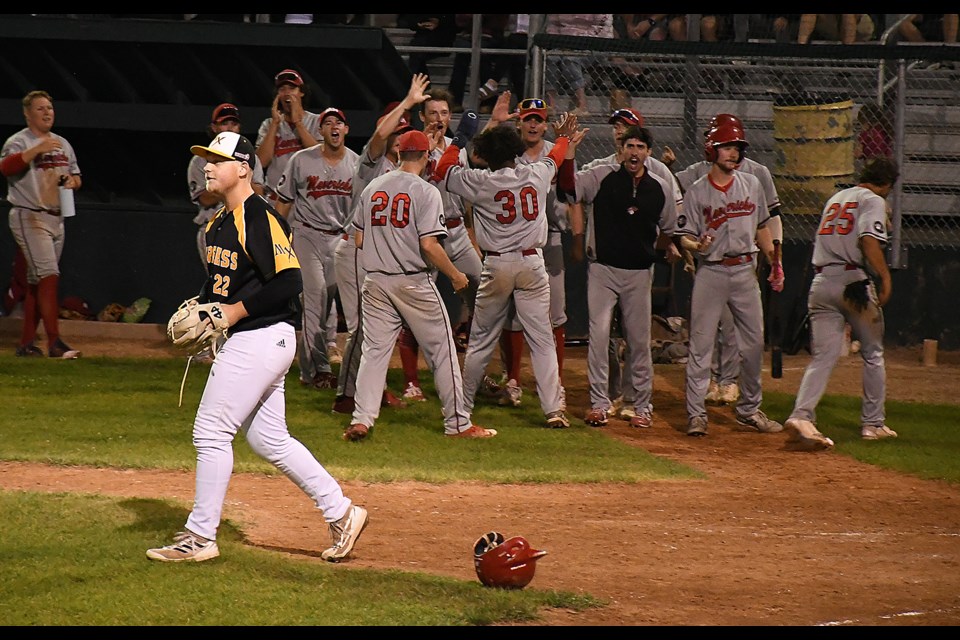 That was the theme of the night for the Moose Jaw Miller Express in their opening game of the Western Canadian Baseball League East Division final, and unfortunately for the local squad, they were unable to take advantage of the vast majority of them.

And as a result, the Medicine Hat Mavericks are heading home with a chance to wrap up the best-of-three series on Saturday night.

The Mavericks’ Ranciel Ventura scored the game-winning run on a wild pitch by Express closer Reece Helland in the top of the ninth inning and Medicine Hat would go on to take a 2-1 victory.

“Top to bottom I still think we’re the better team, we put 10 hits on the board but we just didn’t get the timely hitting,” said Miller Express assistant coach Cory Olafson. “We had a lot of hits with two outs and left a lot of guys on base tonight, loaded and on second and third. We had our chances but just didn’t get the big hit tonight.

All told, Moose Jaw would leave 12 on base, most of those in scoring position, as the Mavericks pitchers escaped jam after jam.

After the Miller Express were caught stealing twice in the first inning to end a burgeoning rally, Joe Osborn hit a two-out triple in the bottom of the second to look to get something going. Medicine Hat starter Garrett Nicholson got out the first of many dangerous situations, though, getting Greyson Barrett to pop out to third.

Medicine Hat struck first in the third, taking advantage of a trio of singles and an error to bring home Zach Stark with the opening run, but Moose Jaw’s Ethan Merk would get a strikeout to escape any further damage.

Singles by Luke LaChance and Zach Campbell lead to both finding scoring position in the bottom of the frame, and Cam Grant drew a walk to load the bases, but Nicholson would strike out Nate Mensik and get Bryan Reyes to pop out to short right field to end the threat.

It was Osborn and Austin Gurney’s turn to get themselves into scoring position in the fourth after a hit by pitch and a walk, but Nicholson would escape again, this time getting LaChance to strike out and Michael Speck to fly out into right field.

Nicholson left the game after the fourth, and he definitely gave Medicine Hat a chance to win — holding Moose Jaw scoreless, scattering five hits, walking two and striking out three.

The Express got a runner into scoring position again in the fifth, but Ethan Bromley struck out Gurney and once again the Mavericks escaped trouble.

Liam Sommer took over on the mound for Merk in the seventh, with the Regina native having put together a gem of a quality start, holding the Mavericks to their single run on five hits and striking out five, walking none.

“Merk came in and did a hell of job for us, he pitched well tonight and then the bullpen came in and did their job and we can’t ask for anything more than that,” Olafson said.

Sommer pitched a scoreless seventh, and after the Express once again went down without scoring a run in their half, closer Reece Helland came on in the eighth to attempt to shut things down. That he did in the eighth, striking out a pair and getting a ground out.

Moose Jaw responded by getting lead-off hitter Austin Gurney into scoring position with one out thanks to a base hit and a balk in their half, and LaChance would come through, flaring a single into right field to score Gurney with the tying run.

The Mavericks would get out of the jam with no other damage, though, and quickly got a rally going in the ninth.

Nathaniel Ewing hit a double that Speck almost tracked down in centre field, and Ventura hit a single one batter later to put runners first and third with no outs.

Helland got Deon Reese to ground out to second and nearly escaped the inning when Zach Stark hit a sharp grounder to short. After a lengthy rundown involving both Ewing and Ventura, the Express tagged out Ewing going home and nearly gunned down Venture at third. He was called safe on a close call, setting up the game-winning run.

Helland got to two strikes on Tory Nelson but sent a pitch to the backstop on his next offering, allowing Ventura to come home and give Medicine Hat a 2-1 lead.

Mavericks reliever Mathew Krall retired the side in order in the ninth to earn the win.

The two teams are right back at it on Saturday night in Medicine Hat, with Kaleb Waller expected to get the start. Game 3 will be back in Moose Jaw if necessary, with first pitch at 7 p.m. at Ross Wells Park.