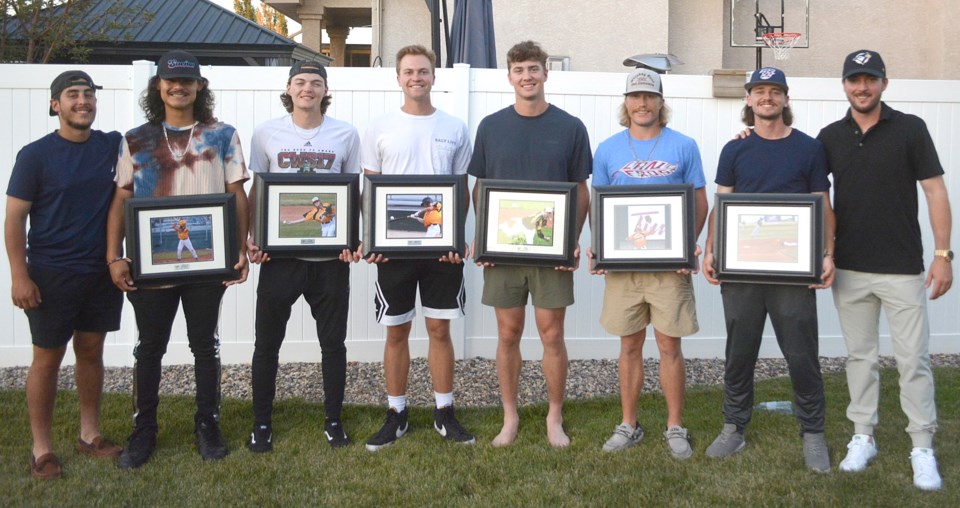 It didn’t take Moose Jaw Miller Express outfielder Nate Mensik very long to make a statement when it came to what fans could expect from him during the Western Canadian Baseball League season.

A two-run home run in the bottom of the ninth of the season opener at Ross Wells Park nearly triggered a comeback against the Medicine Hat Mavericks, and set the stage for what would be a stellar campaign.

Mensik was named the Miller Express Most Valuable Player during the team awards banquet last week after putting together a season that saw him lead the WCBL in home runs from start to finish in addition to providing solid defence for the team in right field.

The Doane University standout finished tied for the WCBL lead with 11 round-trippers in addition to 10th overall with 42 runs batted in, eighth with 48 runs scored while putting together a .314 batting average. All told, he’d finish with a solid .942 on-base-plus-slugging percentage, tied for third-best on the team.

Given how well the Miller Express hit the ball this season, it comes with little doubt that whoever won the team’s Silver Slugger Award was also going to have some gaudy numbers, and that’s certainly the case with Bryan Reyes.

The San Diego product arrived in Moose Jaw from Vanguard University and just never stopped hitting, hovering around the WCBL batting average league leaders all season. He’d finish with a .356 average, tops on the team among eligible hitters (Dawson Tweet hit .367, but didn’t have enough at bats to qualify for the league leaders) and fourth overall in the WCBL. Reyes tacked on four home runs and 45 RBIs — the latter tied for second-best in the league — while also raking 14 doubles and putting together a .961 OPS, second-best on the team.

The Top Pitcher Award was shared by Kellan Voggesser and Jesse Scholtz, and for good reason. While the WCBL all-star duo had vastly different roles on the team, they both had incredible seasons while helping anchor the starting pitching staff and bullpen.

Voggesser was Mr. Quality Start for the Miller Express right from the opening game of the season, and by the time everything was said and done, he’d have seven outings with three runs or less over six innings in 10 of his starts. The Fort Collins, Col. product ended up with a 4-5 record while putting together a 3.90 earned run average, finishing eighth in the WCBL with 58 strikeouts and a 1.44 walks and hits per inning pitched (WHIP).

He was also lights out in the Express playoff opener, holding Swift Current to a pair of runs while striking out 10.

Scholtz emerged as an absolute workhorse out of the bullpen for the Miller Express and an incredibly effective one at that. The Grain Valley, Mo. native went a stretch of 24 games from the start of the season on May 27 to July 11 without allowing more than two earned runs in an inning, putting up zeros in 20 of those outings. He served as the team’s closer until Reece Helland arrived mid-season, racking up five saves, and would end up making a league-high

The Miller Express Gold Glove Award went to center fielder Michael Speck. The Roaring Springs, Penn. speedster and Spalding University senior turned in a vacuum-like performance in the outfield while also emerging as a threat on the basepaths, and hit over .300 much of the season despite batting out of the nine-hole.

Speck would end up with 76 put-outs in 367 ? innings while committing a single error for a stellar .987 fielding percentage. He also recorded a pair of outfield assists while suiting up in a total of 44 games.

The Miller Express Coaches Award is always a special one, and it was no different this year, going to graduating senior Zach Campbell.

Campbell and Helland were the only players to return from the last time the Miller Express played in 2019, and he was an on-field and off-field leader right from the first pitch of the season. The Warren, Ohio native and Tiffin University senior was an absolute stalwart at the top of the Express order, suiting up in all 56 games, one of only three WCBL players to do so.

And it wasn’t just a courtesy move, either. Campbell was a terror at the plate, hitting .339, running away with the WCBL lead with 69 runs scored, finishing second with 77 hits, sixth with 15 doubles, drawing a league-high 50 walks and racking up 12 stolen bases.

He was named to the WCBL All Star Game for his efforts, joining fellow award winners Mensik and Reyes as offensive players at the event in Okotoks.

Campbell joins Speck and University of Jamestown senior Luke Shekeryk as players graduating from the Miller Express this season.