Big inning leads to loss to Weyburn for Miller Express 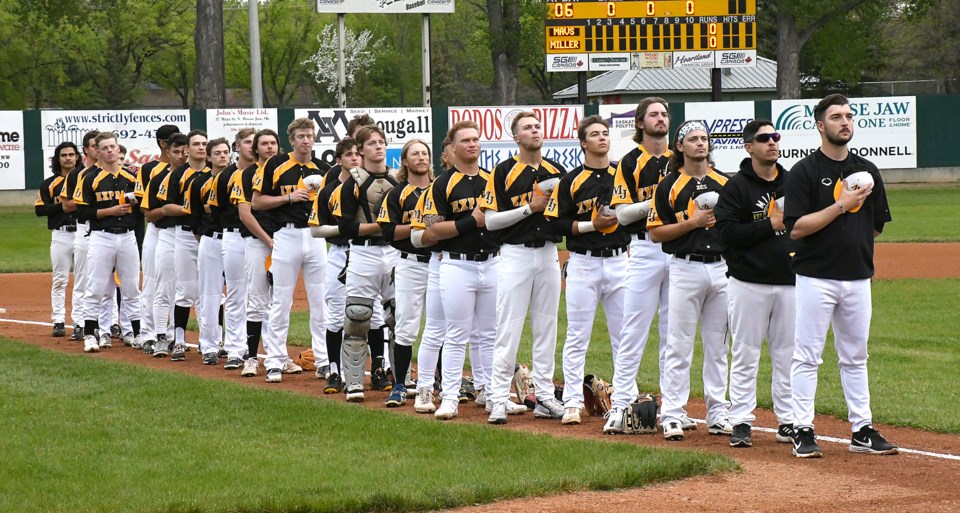 Beavers put up six in second inning, go on to 9-3 victory in WCBL action

The Moose Jaw Miller Express have had many a game this Western Canadian Baseball League season where they’ve lived by the big inning.

On Wednesday night in Weyburn, the shoe was on the other foot — the Beavers batted through their line-up and scored six runs in the second before going on to a 9-3 victory at Tom Laing Park.

The loss dropped Moose Jaw to 17-8 on the season but sees the local squad remain four games up on the Swift Current 57’s for first place in the East Division.

The big inning started with four of the first five batters starter Moose Jaw starter J.J. Padilla faced drawing walks, leading to the first run of the frame. A two-run double off the bat of Nolan Machibroda made it 3-0 and two batters later, Blaine French would hit a three-run home run to give Weyburn their six-run edge.

The Beavers tacked on another three in the sixth to lead 9-1 before the Millers added a pair of runs in the eighth to cap scoring.

It was one of those nights in general for the Express pitching staff, as Padilla allowed four runs on two hits and six walks in 1 ? innings of work before Cam O’Reilly surrendered two runs on three hits over the next inning.

Kaleb Waller took over in the third and surrendered two runs on five hits in 2 ?; Triston Seitz got two outs in the sixth, allowing a run on two hits. Livio Bundi closed things out, pitching the eighth and ninth ad striking out four while holding Weyburn scoreless.

The Express batters only picked up five hits on the night, with Parker Dorrance, Reece Helland and Robert Gurney scoring their runs. Greyson Barrett hit a pinch-hit run-scoring double in the eighth for the lone extra-base hit for Moose Jaw.

The Miller Express are back in action tonight when they travel to Regina to face the Red Sox. Next home action is on Canada Day against the Weyburn Beavers, with the Miller Express hosting a special Tailgate Party in Ross Wells Park prior to the game.

The event will include a special auction of the Canada Day Miller Express jerseys and plenty of giveaways throughout the night.

Photo by Randy Palmer
VIA: https://www.moosejawtoday.com/local-news/big-inning-leads-to-loss-to-weyburn-for-miller-express-5537269