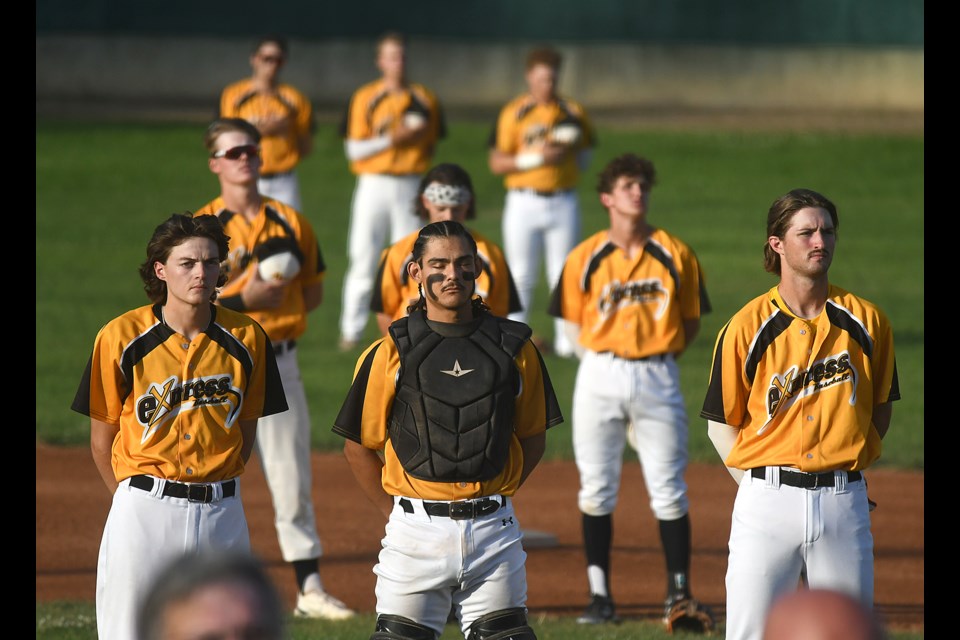 The Moose Jaw Miller Express are heading into the Western Canadian Baseball League playoffs on a high note.

That gave the local squad a 33-23 record heading into the post-season against the Swift Current 57’s, one of the top regular-season showings for the Express in recent seasons.

But there’s always a catch heading into the WCBL playoffs, and that’s no different this year.

With players beginning to return home to prepare for their college baseball seasons, rosters throughout the league begin to deplete. It’s a matter of how the league’s season runs into August, with many NCAA programs starting to kick into gear in the coming weeks, and as a result, requiring their players to report.

For the Miller Express, that means ace pitcher Tim Carlson, pitcher Andrew Barger, third baseman Parker Dorrance, catchers Martin Rodriguez and Robert Gurney are all back home after putting together solid seasons with the local squad. And to top it all off, all-star pitcher Jesse Scholtz is also on his way home on Monday, after leading the league in appearances and helping anchor the bullpen.

None of that is ideal, and the Miller Express aren’t the only team in that situation — Swift Current, for example, has also seen their roster take a hit leading up to the playoffs. That all has Miller Express head coach Eric Marriott remaining confident the team will be able to continue their winning campaign, ideally well into a solid playoff run.

“Most of our bats are still here, we lost a couple of guys on the arm side, but that’s how it is,” Marriott said Sunday afternoon. “We’re just looking to keep moving on, the boat stops for no one and there are lots of other teams who are in the same situation as us. But luckily our offence has carried us all year long, and we’re going to rely on them this post-season.”

At one point in the campaign, they could field a full starting line-up of players hitting over .300, with many of those bats also bringing plenty of power. Catcher Bryan Reyes led the way with a .356 average, while Nate Mensik topped the team with 11 home runs.

“Our bats are something special,” Marriott said. “We hold our guys to a pretty high standard, and we’re on them every game not to take a pitch off. They’re pretty locked in every game, they’re proud to play for the Miller Express and they want to put up the stats to show their school back home that they’re the player they’re expected to be as well.”

Of course, you can’t win without solid pitching, and the Express still have plenty of horses in that regard, too. All Star Kellan Voggesser will start Game 1 Monday night, with Cameron Dunn going in Game 2 in Swift Current.

“As long as our starting pitchers give us an opportunity to stay in the bulk of the game then we’ll piece it together in the back end, coach (Michael) Gonzalez and I,” Marriott said. “And for the most part, our bullpen has done a good job. There have been a few ups and downs, but that’s every team and if ultimately we can get the ball to Reece Helland at the back end of the game, I like our chances.”

That all rolls into their playoff opener. The Express have had their share of success against the 57’s, having won nine of 12 meetings, bringing plenty of confidence to the proceedings.

“We’ve had the upper hand against them most of the season, but we’re not going to take them lightly,” Marriott said. “They’re a good team, they’re coached well, they have good starting pitchers and our offence has to show up. It’s simple as that, we worked all year to have the higher seed in Game 1 at home and that advantage and I believe that the boys are ready to go.”

The good thing is there is no shortage of winning pedigrees in the Express line-up. The vast majority of Moose Jaw’s crew have found success in college, something Marriott hopes will help when things inevitably get down to the nitty-gritty.

“Most of these guys have played in pretty important games back home, they go to good schools and have played in conference championship games and conference tournaments,” Marriott said. “So they’re not nervous, they’re excited to get the ball in the playoffs and move onto the second round, and ultimately I believe we’ll push for a WCBL championship here in Moose Jaw.”

Game 1 of the series with Swift Current is Monday at Ross Wells Park, with first pitch at 7:05 p.m. Game 2 is in Swift Current on Tuesday, with the deciding contest set for Wednesday if necessary. Be sure to check www.moosejawtoday.com for all the up-to-date scores and details.