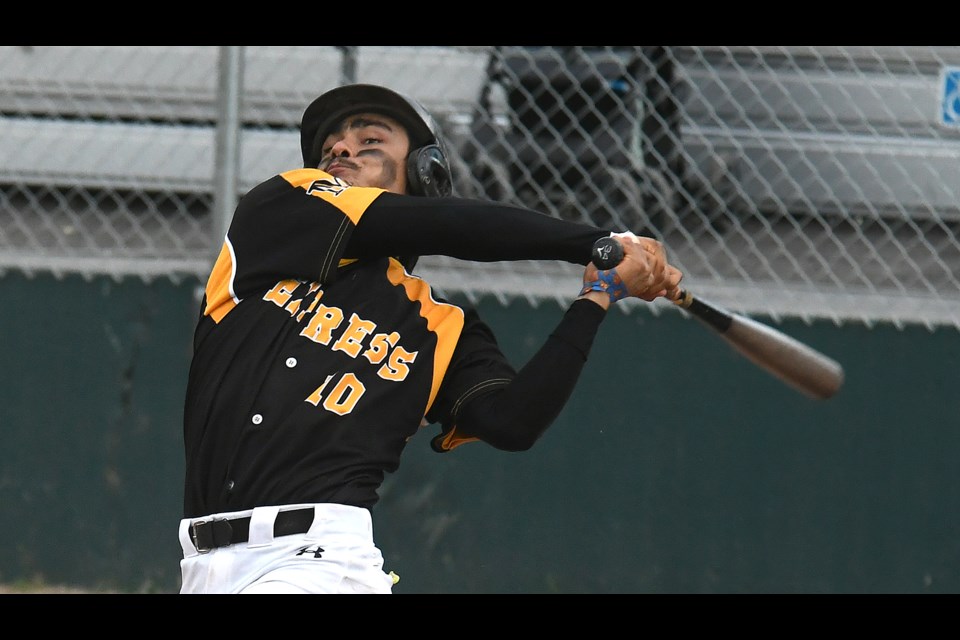 The Moose Jaw Miller Express have come close to accomplishing a relatively rare feat a few times this Western Canadian Baseball League season, and on Wednesday night in Medicine Hat, they finally pulled it off.

Every player in the Express starting line-up had at least a single on their ledger as Moose Jaw pounded out 14 hits and went on to a 6-3 victory over the Mavericks.

And by the time the game was over, they had another interesting stat to their credit.

Eight of the nine players in Moose Jaw’s line-up on Wednesday night are now hitting .300 or better, with Bryan Reyes leading the way after a 3-for-5 night that boosted his batting average to .373, good enough for third overall in the WCBL. Dawson Tweet is also hitting a torrid clip, with a 3-for-5 night of his own boosting his average to .383, but without enough at bats to qualify for the league leaders.

As one might expect, all that offensive firepower was enough to get the job done against the Mavericks, as Moose Jaw put up three runs in the fourth to take a 4-2 lead and never looked back.

Reyes accounted for all of the offence in that inning with one swing of the bat, as his two-out base-loaded double brought home Tweet, Zach Campbell and Cam Grant with the tying, go-ahead and winning runs.

Tweet added a two-run double of his own in the ninth as Moose Jaw tacked on a pair of insurance runs.

Their pitching staff wouldn’t really need them, though.

Triston Seitz started the game and allowed a pair of runs in 2 ? innings of work before Jesse Scholtz took over and did what one would expect from a WCBL all-star — 3 ? innings pitched with four hits scattered throughout and no runs allowed.

Livio Bundi allowed a run on two hits in the seventh inning, setting the stage for closer Reece Helland in the final two innings. The Moose Jaw product allowed a single hit and struck out three in the final two frames to earn his fourth save of the season.

The Miller Express improved to 28-15 on the season, good enough for first place in the WCBL East Division with a 4 ½ game lead over the Regina Red Sox. The Express are also the defacto hottest team in the league, carrying an eight-game winning streak and an 8-2 record in their last 10 games.

They can expect a challenge over the next two nights, though, as they travel to Sylvan Lake to take on the West Division-contending Gulls for games Thursday and Friday night. Sylvan Lake carries a 29-14 record into the set and are 7-3 in their last 10.

Next home action is Wednesday, July 27 when they host the Brooks Bandits to kick off four straight games at Ross Wells Park.

Photo by Randy Palmer
VIA: https://www.moosejawtoday.com/local-sports/miller-express-continue-to-roll-defeat-medicine-hat-for-eighth-straight-win-5608787