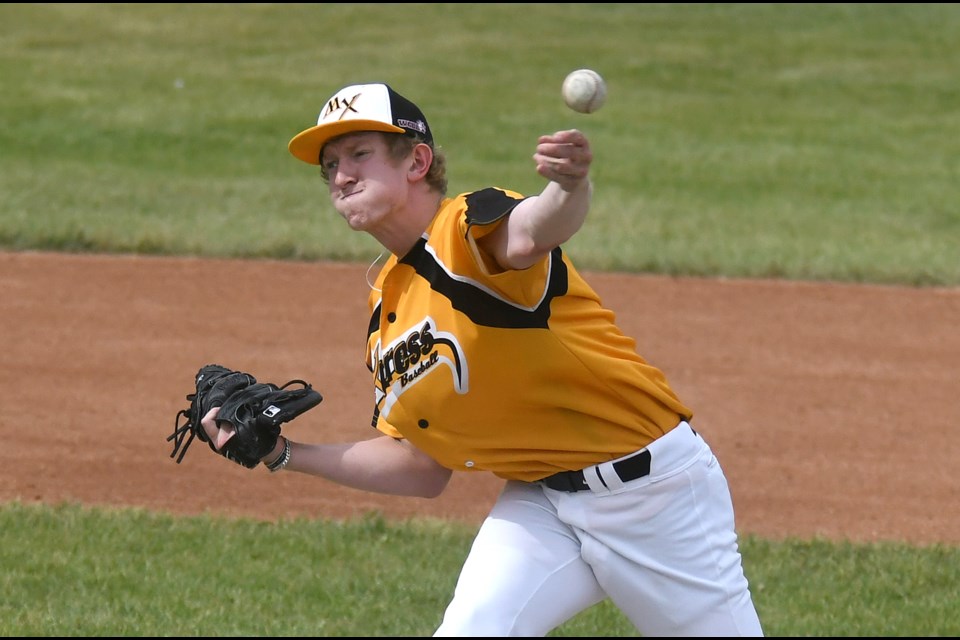 After seven-game winning streak, Moose Jaw falls 8-4 to Beavers and 8-4 to Swift Current in action at Ross Wells Park

As the old saying goes, all good things must come to an end.

For the Moose Jaw Miller Express, that translated into a pair of losses in Western Canadian Baseball League action over the weekend at Ross Wells Park, snapping a seven-game winning streak that had seen the local squad move into first place in the East Division.

Moose Jaw dropped an 8-4 decision to the Weyburn Beavers on Saturday night before following up with an 8-4 loss to the Swift Current 57’s Sunday afternoon, falling to 7-5 on the season.

As a result, the Millers are now tied for first in the division with the 57’s heading into their match-up with the Medicine Hat Mavericks on Tuesday, June 15 at Ross Wells Park.

Moose Jaw got off to a good enough start in Sunday’s contest, putting up a pair of runs in the opening inning to take a quick 2-0 lead.

The 57’s got a two-run home run from Matthew Ward in the second, though, and Tejean Smith added another two-run round-tripper the next inning to make it 4-1 Swift Current.

That marked the end of the night for Express workhorse Triston Seitz, who allowed four runs on four hits over three innings.

The Express battled back to tie the game with single runs in the third and fifth innings, but that would be the last good news at the plate for a team that has had little trouble putting up runs in the early part of the season.

“Today we just couldn’t get that big hit,” said Miller Express general manager and assistant coach Cory Olafson. “Last night our sticks weren’t alive, where we came out hitting better today and the bullpen did a heck of a job for us. We just couldn’t get the big hits we needed when their guy came in and shut us down the last few innings.”

The Millers’ Nick Hill turned in a stellar effort in relief, allowing three runs — one earned — in 4 ? innings of work and striking out six. Swift Current did all their damage against Hill in the eighth as he began to tire.

Moose Jaw had a glorious chance to give Hill some run support in the bottom of the sixth when they loaded the bases, but they wouldn’t be able to get anything across.

Swift Current’s Zack Stylianou shut the Express down from there, pitching the final three innings and allowing only two hits.

Jesse Scholtz closed out the eighth inning for the Express; Kaleb Waller allowed a run in an inning of work in the final frame.

“It’s a 56-game schedule and you’re not going to win every game, and the important thing is we played better today than we did last night, so that’s good to see,” said Olafson. “You can’t get too high when you win seven in a row and you can’t get too low when you dump a couple. So we’ll just get back at it and be ready for the next one.”

Zach Campbell was 2-for-5 with two runs scored for Moose Jaw, Bryan Reyes had a pair of RBI and Cam Grant had a 2-for-4 showing.

The Miller Express saw their seven-game winning streak snapped on Saturday night after a tough showing control-wise from their pitching staff.

The Express hurlers would surrender 12 walks, leading to the Beavers taking a 7-0 lead heading into the bottom of the sixth. Moose Jaw scored one in that inning and attempted to get back into things with three in the eighth, but would get no closer.

Andrew Barger started and allowed two runs on three hits, walking five; Livio Bundi allowed two runs on two hits and walked three while getting a single out in the fourth; J.J. Padilla tossed the next 2 ? innings and surrendered three runs on four hits and walked three. Cam O’Reilly closed things out with a solid three innings work, allowing a run on four hits and striking out five.

Parker Dorrance was 3-for-4 at the plate, Nate Mensik 2-for-4 with an RBI and Austin Gurney 1-for-2 with two RBI.

Photos by Randy Palmer
VIA: https://www.moosejawtoday.com/local-news/miller-express-drop-pair-of-weekend-contests-to-weyburn-swift-current-5470738