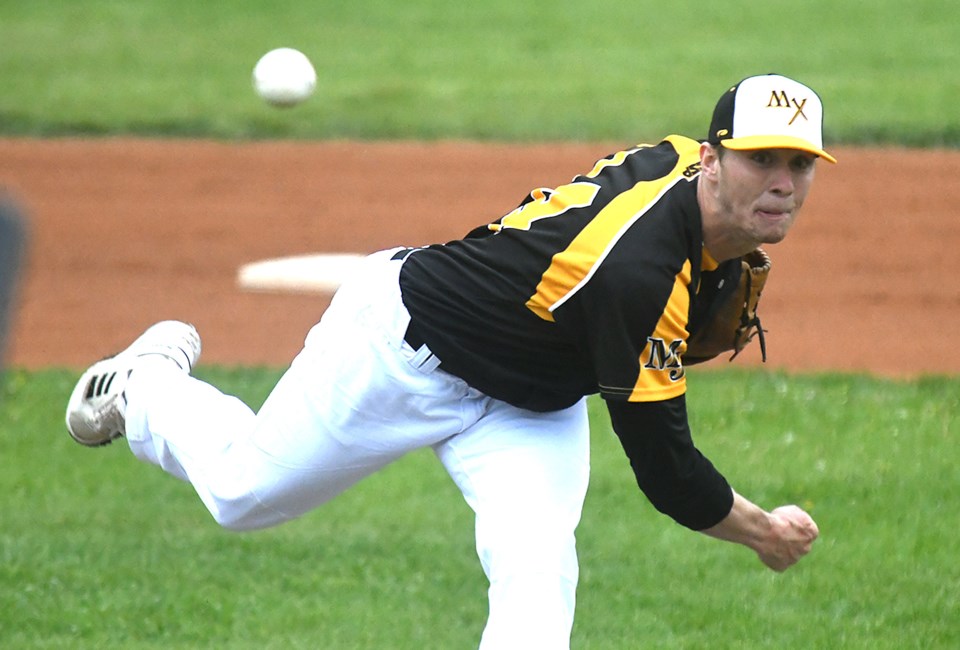 What’s the best way to deal with a seven-game losing streak?

Go off on a seven-game heater right on the heels of your last loss.

The Moose Jaw Miller Express have done precisely that in Western Canadian Baseball League action, sweeping both ends of a doubleheader with the Medicine Hat Mavericks on Tuesday night, extending their winning streak to seven games and once again taking a solid hold on the East Division lead.

Moose Jaw picked up 6-2 and 10-5 victories at Ross Wells Park, seeing their record improve to 27-15 on the season, good enough for a 4 ½ game lead on top of the WCBL standings over the Regina Red Sox.

The Express are also 7-3 in their last 10 contests, giving them the top record in the league over that span of games.

“It’s been a great season, two big wins today with Kellan Voggesser and Cam Dunn [pitching] great on the mound for us,” Miller Express head coach Eric Marriott told Joe Gunnis with EMJ Marketing after the game.”Then our offence, per usual,  did exactly what we expected them to do. The season has been great, we’re on a seven-game win streak right now and we have something really special brewing down here.”

Only a few days after getting a complete-game gem from Tim Carlson, it was fellow WCBL all-star Voggesser’s turn to shine in game one. Voggesser would allow only two runs on seven hits in seven innings of work, striking out eight and walking one in the process. And like Carlson, control was the key — of the 108 pitches Voggesser threw in the seven-inning contest, 72 of them were for strikes.

The outing was the longest for Voggesser with the Express this season, having put up four six-inning quality starts in his previous eight trips to the mound as a starter.

As has been the case much of the current winning run, Moose Jaw gave Voggesser all sorts of support early with a four-run first inning. Luke LaChance had the big hit in the inning, a two-run single that brought home Parker Dorrance and Hudson Barrett with the third and fourth runs of the frame.

The two teams exchanged runs in the fourth and fifth innings to close out scoring.

LaChance finished 1-for-3 with three runs batted in, while Dorrance was 2-for-3 with a pair of run scored.

Game two was more of the same for the Express offence.

WCBL all-star Nate Mensik hit a solo home run in the first inning for his league-leading ninth of the season and the Millers were off and running, putting up a pair that inning and another two in each of the second and third for a 6-0 lead.

Dunn was the beneficiary of that lead and would put it to good use, allowing two runs on two hits in 4 ? innings. Regina product Ethan Merk would allow three runs on two hits in 1 ? innings, but a four-run fifth saw Moose Jaw leading 10-5 at that point. Livio Bundi tossed a scoreless seventh, striking out the side.

Mensik finished the night with a pair of runs scored and three RBI to go along with his homer, Barrett was 1-for-2 with three runs and WCBL all-star Zach Campbell 2-for-3 with a run scored. Michael Speck also crossed the plate twice.

The Miller Express are back in action Wednesday night when they travel to Medicine Hat for another meeting with the Mavericks before taking part in a two-game set Thursday and Friday in Sylvan Lake against the West Division-contending Gulls (29-14). After an off weekend for the all-star break, the Express take on the Swift Current 57’s Monday and Weyburn Beavers Tuesday before returning home for a four-game homestand, beginning July 27 against the Brooks Bombers.

Photo by Randy Palmer
VIA: https://www.moosejawtoday.com/local-news/miller-express-extend-winning-streak-to-seven-with-twinbill-sweep-of-mavericks-5604986