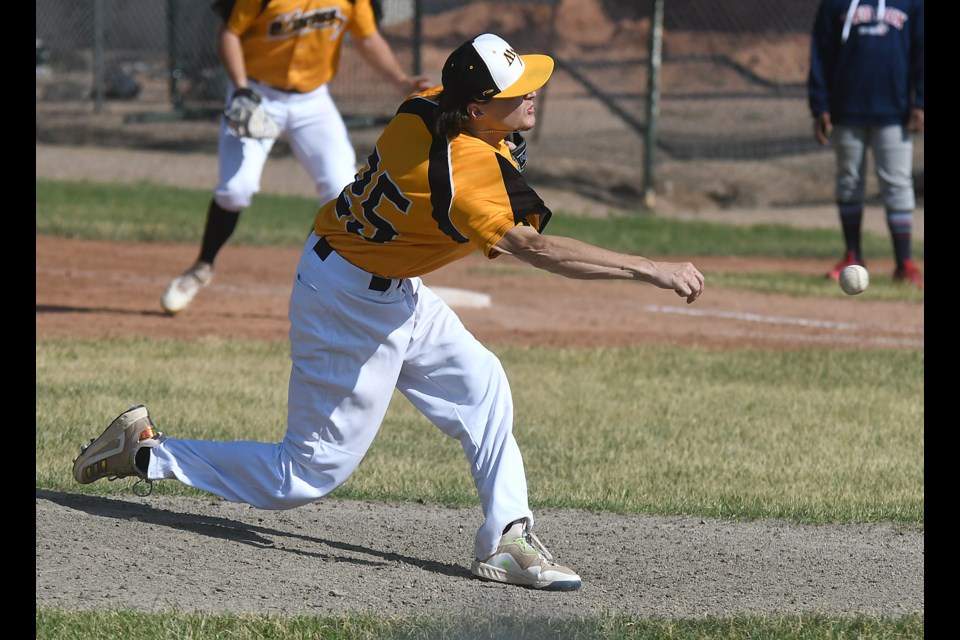 Of all the gods of sports, the baseball gods are undoubtedly the most capricious.

One day you’re scoring six runs without getting a hit, the next you’re giving up 10 unearned runs in an inning.

The important thing is how you deal with those swings in momentum — and for the Moose Jaw Miller Express, it’s just a matter of going to work no matter what the scoreboard says.

Only a few days after enjoying a big inning filled with oddities against the Medicine Hat Mavericks, the shoe was on the other foot against the Regina Red Sox in Western Canadian Baseball League action, as Regina would put up a 10-spot in the second inning without a single earned run going on the board.

But Moose Jaw didn’t give up, getting right back into things with six runs of their own an inning later and eventually dropping a 12-9 decision — but not before getting the tying run to the plate in the bottom of the ninth, quite the feat when only six innings earlier you were down by nearly a dozen.

“I’ve been saying it all year, we have the best offence in the league and there’s no doubt in my mind,” said Miller Express head coach Eric Marriott. “These boys can really swing it and there’s no game we’re out of with our offence. Then Jesse Scholtz came in and was amazing, absolutely shut them down, threw up zeros for us and gave us a shot. We just couldn’t push the tying run across in the ninth and that’s going to happen.”

Regina’s big inning was set up by a trio of errors by the usual sure-handed Express infield. A grand slam by Travis Johnson provided the big hit in the frame and by the time the Red Sox were done, they’d sent 15 runners to the plate and scored their 10 on only four hits.

That led to one of the strangest pitching lines you’ll ever see, with starter Kellan Voggesser giving up 10 runs, none earned, on three walks and two strikeouts in 1 ? innings of work. His ERA remains a solid 3.15 on the season.

“It’s one of those Ross Wells innings, you know?” Marriott said. “One error led to two errors led to three errors, then a home run and things just kind of snowballed. But that’s baseball sometimes, and it’s not how you react to it, it’s how you bounce back from it so you’ll be fine.”

Moose Jaw’s bats got to work in the third, with a two-run home run by Bryan Reyes and a three-run triple off the bat of Luke LeChance getting the Miller Express back in striking distance.

After J.J. Padilla allowed two runs in 1 ? innings of relief, it was time for Scholtz, and in what has become a regular occurrence this season, he was outstanding, tossing five innings of relief and allowing only two hits while striking out three. Reece Helland closed things out for Moose Jaw, allowing a single hit in a shut-out ninth.

The loss snapped a seven-game winning streak for Moose Jaw, but that’s of little concern to Marriott, who is confident of another long run in their near future.

“It’s been great,” Marriott said. “These kids are great and this is a special team. This is a team that’s really close and that’s rare sometimes because they’re all competing against each other to play and things like that. But they’re rooting for each other and have each other’s back and they’re resilient, as you can see today.”

The Miller Express are now 16-7 on the season and sit two-and-a-half games up on the Swift Current 57’s for first place in the Western Canadian Baseball League. They’re back in action on Tuesday night when they host the 57’s, with game time 7:05 p.m. at Ross Wells Park.

Photos by Randy Palmer
VIA: https://www.moosejawtoday.com/local-news/miller-express-nearly-overcome-10-run-deficit-in-loss-to-red-sox-5520424