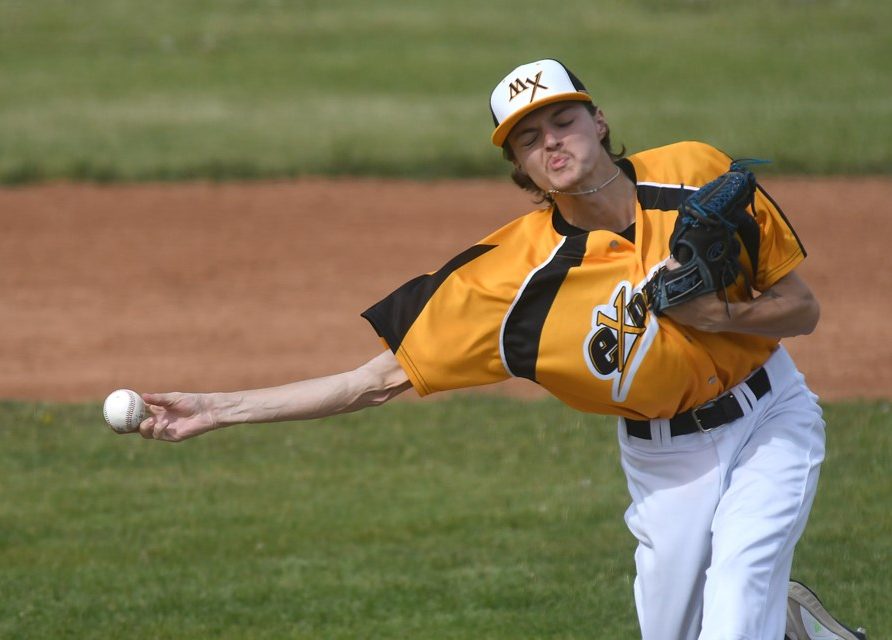 You won’t find a more back-and-forth game than what the Moose Jaw Miller Express and Weyburn Beavers put together in Western Canadian Baseball League action at Ross Wells Park on Sunday afternoon.

Even though Weyburn scored eight runs over the final three innings, it wouldn’t be enough to get past the Miller Express offence, as Moose Jaw would go on to an 11-10 victory. The win was the fourth in a row for the local squad, good enough for a 4-3 record and a tie for first place with Swift Current in the East Division.

“Especially after the way we started at 0-3, these guys are getting comfortable with each other, the vibes are good in the clubhouse and the bats are hot right now,” said Miller Express coach Eric Marriott. “Our pitchers are doing what they need to do to and it was a great win today.”

Andrew Barger got the start for Moose Jaw and ended up with a solid outing except for one of the strangest innings you’ll see in the third — three hit batters, a balk, an error and a base hit saw Weyburn take a 2-1 lead out of the inning. Barger was fine from there, though, with those runs all he’d allow in 4 ?, giving up three hits and striking out four in the process.

The Miller Express looked to take control of things in the fourth by putting up a four-spot and following with a run in the fifth, but Weyburn came all the way back with five runs in the top of the seventh.

True to form, Moose Jaw retook the lead in the bottom of the inning and after Weyburn tied things up in the eighth, Austin Gurney would hit a two-run single to key a three-run frame and bring home the eventual game-winning run.

Seeing his offence roll along at such a high-scoring clip has been plenty satisfying for Marriott.

“It’s nice. We know we have kids here that are going to come in and grind every day at the plate and have quality at bats and 31 hits in the last two games will do the job for us, too,” he said. “So we’ll just stick with the same approach every day, we’re going to get ours and not be overly aggressive, attack when the ball is in the zone and keep the foot on the pedal.”

One area that has been a concern is the middle relief. Triston Seitz looked to have things in hand through two innings of work, but would end up allowing five runs on four hits in relief of Barger. Nick Hill faced two batters in the eighth and was unable to get a key out, leading to closer Jesse Scholtz coming in for the extended save. He’d allow two runs on three hits to finish things off.

“Our starting pitching has been great so far, they’ve been huge for us,” Marriott said. “The bullpen struggled a little bit today, but we had Jesse Scholtz come in and slow it down for us and get us the save and pick up another win.”

The two runs were the first Scholtz has allowed in five appearances this season, making the side-arm gunner the defacto finisher. There’s little question his unique delivery is a part of that, and it’s something that came about by necessity for the Grain Valley, Mo. product.

“I only started doing this about a year ago, I used to have labrum problems going over the top and I wanted to keep pitching so I dropped down and made the adjustment and it’s been working so far,” Scholtz said.

Scholtz has been impressed with what he’s seen from the club in the early part of the season, and looks forward to seeing more of the same in the near future.

“I came in pretty open-minded and things have been going pretty good… personally it wasn’t the result I wanted today, but it was good enough for the win,” he said. “That’s all we can keep doing, grinding out the wins.”

The top of the Miller Express batting order once again had a great day.

Bryan Reyes finished the game 3-for-5 with two runs and an RBI, improving his average to .500 on the season and moving the San Diego product into a tie for the top average in the WCBL.

Moose Jaw is right back in action on Monday night when they travel to Regina to face the Red Sox, Next home action is Thursday against the Swift Current 57’s. Game time is 7:05 p.m. at Ross Wells Park.