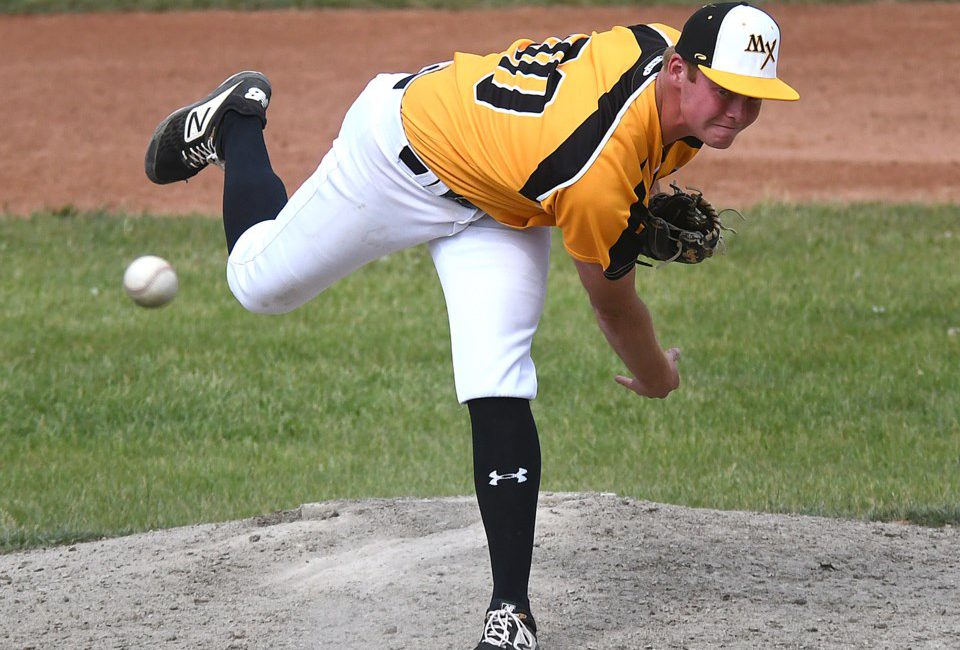 After putting together their longest winning streak of the season, the Moose Jaw Miller Express have again fallen on hard times.

And now the pressure is on at the top of the standings.

The Express lost their third-straight one-run game and fourth-straight overall after dropping a 4-3 decision to the Swift Current 57’s on Monday and falling 8-7 to the Weyburn Beavers on Tuesday.

As a result, Moose Jaw is now 28-19 on the season and have seen their lead atop the Western Canadian Baseball League’s East Division dwindle to a single game over the Regina Red Sox.

The 57’s did all their damage in the fourth inning, as Justin Barnes and Thomas Collins each hit two-run singles to give Swift Current a 4-0 lead.

The Express gradually clawed their way back into the game from there, but 57’s starter Adam Golby didn’t make it easy. He’d end up with his longest start of the season, going eight innings and allowing three runs on seven hits in the process, striking out seven.

Luke Shekeryk knocked home Zach Campbell with Moose Jaw’s first run in the fourth inning, and Campbell did the same for Luke LaChance in the fifth, getting the Express back within a pair.

Parker Dorrance then brought the Millers within a run in the seventh, hitting a lead-off single, going to third on an error to Golby and scoring on a wild pitch.

The Express would be unable to get a runner into scoring position in the final two frames, though, dropping the one-run decision.

Triston Seitz started on the mound for Moose Jaw and allowed all four runs in 1 ? innings of work before Liam Sommer tossed a scoreless 1 ? and J.J. Padilla scattered four hits over three scoreless innings, Cam O’Reilly got one out in the eighth and didn’t allow a run, setting up Jesse Scholtz to close things out with a scoreless eighth and ninth.

Every baseball team goes through an exceptionally tough loss or two during the regular season, and Tuesday night was one of those for the Miller Express.

After getting a solid start on the mound from affiliated player and 18U AAA Canucks standout Kaleb Waller — one run on two hits over five innings — the bullpen couldn’t shut the door, allowing eight runs over the final three frames.

O’Reilly surrendered two runs on three hits in 1 ? innings before Livio Bundi allowed three runs while getting a single out in the seventh. Scholtz allowed a run on three hits in the eighth as Weyburn tied the game 7-7.

Moose Jaw got the go-ahead run into scoring position in the ninth but wouldn’t be able to score, and the Beavers would draw four walks off reliever Andrew Barger in the bottom of the inning, leading to Brandon Billesberger scoring the game-winning run on a free pass to Will Baker.

The Express did their damage with a pair of runs in the fourth, a Shekeryk solo home run in the fifth, three more runs in the sixth and a single score in the seventh to make it 7-1 heading into the bottom of that inning.

Campbell and LaChance each hit doubles as their lone hits in the game.

Moose Jaw is back in action Wednesday night for the first of two games against the Brooks Bombers. Game time is 7:05 p.m. at Ross Wells Park.