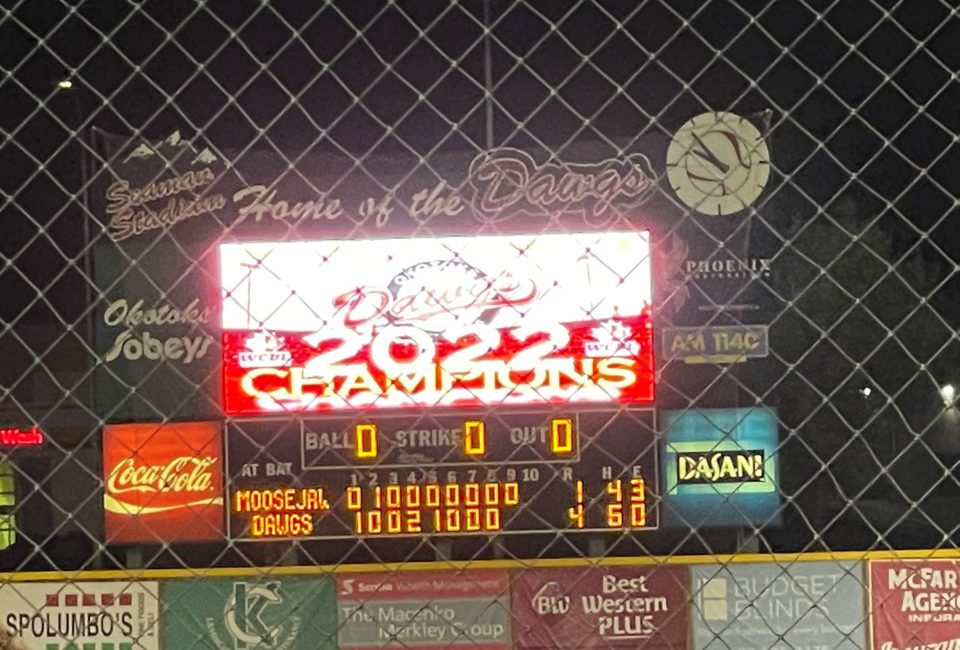 Dawgs score pair of runs in fifth to take lead, go on to 4-1 victory in deciding game of WCBL Final

The Moose Jaw Miller Express gave it their all but came up one game short of a Western Canadian Baseball League championship.

The Okotoks Dawgs scored a pair of runs in the fourth inning to take the lead and never looked back on their way to a 4-1 victory at Seaman Stadium in Okotoks.

Things were exceptionally close in the early going, as Moose Jaw’s Liam Sommer and Okotoks Bryan Baltus found themselves in yet another playoff pitching duel.

The Dawgs got to Sommer first with a run in the bottom of the first, but the Express picked that one that one back in the second when Greyson Barrett hit his first of two doubles on the night to score Joe Osborn.

Sommer went three innings and allowed a single run on two hits while striking out four before giving way to Game 2 hero Cameron Dunn in the fourth.

Dunn would allow two runs on two hits, a hit batter and a walk, giving Okotoks a 3-1 lead through four.

Ethan Merk took over in the fifth and allowed a run on two hits, and Dawgs relievers Ryan Penner (2/3 inning, two hits, no runs), Cade Herman (? inning) and Matt Wilkinson (two innings, no hits, no runs, four strikeouts)  would use that run support to full effect, shutting down the potent Express bats the rest of the way.

Moose Jaw did threaten in the seventh, when Barrett and Luke LaChance found themselves first and third with two out, but Herman would strike out Michael Speck to end the threat.

Baltus was the winning pitcher, having tossed a gem when his team needed it the most — one run on two hits over six innings, striking out nine and walking two.

Reece Helland took over on the moundin the eighth inning and like he has been the vast majority of the playoffs, was unhittable. After a 1-2-3 inning in the eighth, he’d allow a pair of baserunners on a walk and error but would get a ground out to second to end the frame.

Wilkinson would then retire the side in order in the ninth, and the Dawgs became the 2022 WCBL champions.

The loss capped a stellar season for the Express in their first campaign in two years, finishing with a 33-23 record before sweeping the Swift Current 57’s in the first round of the playoffs and knocking off Medicine Hat in three games in the semifinal.

Okotoks went undefeated in the posteseason, sweeping both the Brooks Bombers and Sylvan Lake Gulls to book their trip to the final.